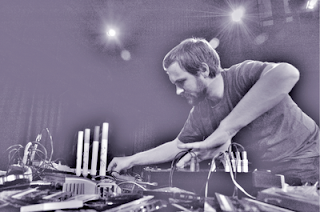 "Jim Campbell (aka the Preterite) is a turntapelist, for lack of a better term. Inspired by proponents of experimental work with vinyl, both avant-garde & hiphop, he started to experiment with the lofi electronics that he found lying around, primarily relics of the tape age. Over time this work elbowed out his time spent behind the drumkit & soon he had put together a unique instrument, his 'cassette scratch orchestra', composed of cast-off phrase trainers, self-made scratchbunnies, a re-purposed & prepared analog cassette multitracker & piles of found & self- dubbed tapes. Campbell works in a variety of contexts, most notably solo, improvising freely, scratching abstract-emotive tone poems on the fly. Aside from composing for theater & dance, he curated the innovative “baender bender” concert series in Dortmund, Germany & has played with musicians as diverse as Claus Van Bebber & DJ Elephant Power, to name a few. A solo debut double cd will be released on the American label Weird Forest in summer 2011."